I couldn’t bear to be let down by the big warm bear that is Cyrus Todiwala. As well as being one of Britain’s best-known Indian chefs, forming half of those Incredible Spice Men, and earning a reputation as an outspoken advocate for British produce; he, his wife Pervin, and the whole Cafe Spice family are great friends of mine.

So I wouldn’t let him get away with short-changing me in sharing his vision of his beloved Bombay with his latest cookbook. But as soon as I pull my copy of ‘Mr Todiwala’s Bombay‘ from its cardboard sleeve I know I, and he, can breathe a sigh of relief; me because it’s a beauty, Cyrus because he won’t have me on his back.

Both the back and front covers are adorned with the images that imbue the whole tome so richly with a sense of place.  Bombay is one of those places it’s possible to be nostalgic for without even ever having visited, that hazy, polluted fug rendering it more romantically than any Instagram filter could. Photographer Helen Cathcart boasts the sort of talent that makes you tingle, whether capturing a shining shoal of fish or the chef reclining in a rickety Irani cafe.

Londoners will know a little of the latter if they’ve discovered Dishoom; a restaurant whose studious efforts to effortlessly capture the essence of a Bombay hangout have expats eulogising about its power to transport. ‘Mr Todiwala’s Bombay’ has trapped just the same feeling between its covers . Forget the airfare and the Visa – try taking a copy onto Dishoom’s verandah to browse over a bun maska. 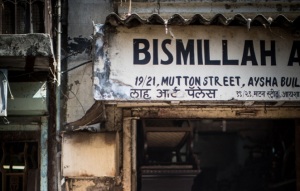 Just like that restaurant, the book is one I can’t wait to share with Bombay buddies. I’d love to send a copy to Kalyan Karmakar, aka award-wining blogger Finely Chopped, who has taken the city into his heart as his adopted home. There’s a little piece of his heart at Dishoom, too – he inscribed his fondest cafe memory onto one of the dishes in the restaurant’s ‘Plate Wallah’ project.

As did Urvashi Roe, fellow Blog Tour reviewer and another fine friend. Sharing food and friendship with folks like this pair, plus Damn Good Curry’s Nilanjani Pai; cricket fanatic and all-round good egg Eklavya Gupte; Bombaywalla Blog’s Simin Patel; the Bawi Bride, Parsi cook Perzen Patel; and the Todiwalas already brings a little of Bombay to Britain for me. This book does just the same.

‘Mr Todiwala’s Bombay’ reeks of India in her finest fragrance – exuding exotic perfume as if it’s chewed a whole box of sweet supari before breathing its sweet nothings into your senses. Cyrus writes as he speaks; you feel he’s confiding his love for the city to you alone, persuading you to visit through the pitter-patter of his prose and the relating of his fond recollections.

Not to mention the recipes. When ‘Mr Todiwala’s Bombay’ arrives, I flip through – slowly at first, then faster as I excitedly discover dishes I already know and love from eating Nilanjani’s ‘Damn Good Curry‘ – foogath, paneer bhurji, sol kadhi.  At the book’s launch, she’s just the same; perusing each page with a smile, a nod, a nostalgic tilt of her head. I’ve been moved to make something from the book as a good luck gift for Cyrus.

It might seem crazy of me to prepare patrani macchi for his party – but there’s nothing fishy about this dishy. I appeal to Cyrus to peel back the leaves to reveal a sleek silver specimen; but this fellow is carved from chocolate, not born of the ocean.  He declares it to be an especially auspicious present to present and I’m duly delighted by his delight – but, to be honest, the need for luck is lacking.

Because ‘Mr Todiwala’s Bombay’ is brilliant. It’s rare that a chef is so completely bound within a book, but this one absolutely abounds with Cyrus’ character. It’s warm, informative, eye-opening and, I sincerely suspect, eye-moistening for anyone who knows and loves the city whose cuisine it celebrates.  It’s more than just a cookbook – it’s a travelogue with tales that truly transport.

All that’s all well and good, but do the recipes live up to the rest? After a trio of lick-the-plate-clean-experiments, I’d say so.  Despite a ‘Magic Bullet’ that fails to conjure a silky-smooth masala, xit ani nishtya chi kodi  – Goan fish curry – sizzles and sings; sweet onion, creamy coconut, sour-smoky kokum. Yum.

Growing up on my late, great Nanny Win’s savoury mince and coddled eggs, kheema pur eeda sends me straight back to the nursery (actually, back to the kitchen for a slice of well-buttered white toast to mop up). My Mumbai no frankie frankly has no egg roti; but the spiced, diced lamb filling is resplendent in its nudity nonetheless.

Dishes are replicated faithfully and authentically, no matter how esoteric the edible, recipes are always straightforward and from-scratch. I can’t claim quite the same, having taken a slight shortcut with dhania-jeera powder from my shiny new @SpiceKitchenUK masala dabba – but the lively, oven-roasted, hand-ground blend works a treat.

All the treats I’ve tried at Cafe Spice Namaste are pleasantly present and correct, including the whole meal we ate there the year Dad’s birthday coincided with Parsi New Year. Having the recipes for jardaloo ma murghi and langan nu custarr to replicate this feast means a time-tested tradition can create new traditions for my British family, Bombay-ing up birthdays for the foreseeable future.

If I have one niggle, it’s that the wriggly, superfine font waifishly whispers, whilst Cyrus’ big boom needs boldness. When everything else about ‘Mr Todiwala’s Bombay’ hits the nail resoundingly on the head, this seems a slight oversight. But it’s perfectly pretty, and certainly won’t deter me from dipping in on a frighteningly frequent basis – there’s many a masala to master!

So the city has a new and unexpected outpost. It’s not a regional restaurant or official embassy. Rather, a tiny kitchen in an Essex country cottage; garlanded with stands of plastic flowers, adorned with picture postcards purloined from Dishoom, cupboards straining at the seams with spices. Mr Todiwala is here, and I’m in Bombay; feet on the cold tile floor, head and heart in the foreign land I feel I know.

To read the other reviews on the week-long ‘Mr Todiwala’s Bombay’ blog tour, click on the links below: