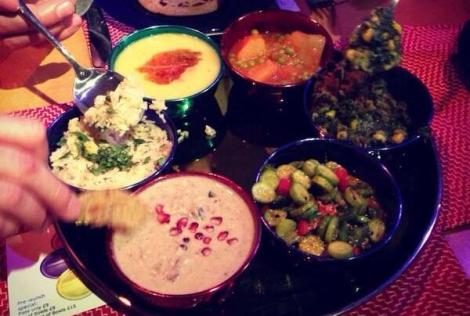 The first time I found myself on a Rajasthani rooftop I wasn’t there at all. I was merely being regaled by tales of my friend (and top TEDx speaker) Masarat Daud’s culinary heritage. She spoke of women laying out rows and rows of handmade mangodis to dry in the summer sun, and I soaked up her stories like those sun-baked lentil paste balls soaked up the rays.

My appetite for the Northern Indian state was whetted. The state’s rich culture is owed to both noble (Rajput) and tribal (Marwari) communities – the former contributing lavish ingredients and bountiful banquets, the latter yielding incredible culinary innovation with incredibly limited means. Although ‘shikar’ was outlawed throughout India in 1972, hunting traditions gave rise to the many cherished and relished game dishes of the Rajasthani repast.

More recently, the vivacious chef Reza Mahammad put the state on the British plate with his television series, ‘Spice Prince of India’. Reza relished every element of Rajasthan’s cuisine, exploring dishes of deserts and palaces alike. I liked it. A lot. Particularly when he took us on a sugar-fuelled, ghee-lubricated tour of the region’s many and varied mithai-wallas.

But in spite of my well-documented sweet tooth, Rajasthan’s cuisine is not a pill I need sugared to swallow. I’m more than happy to gobble it up in all its vibrant forms; from chef Ash Bhatia’s carefully researched, historically-accurate recipes, to the relish-worthy Rajput game dishes on Vivek Singh’s menus, to the ghevar Masarat has yet to gift me (hint hint). 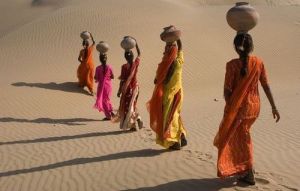 So when I learned that a pop-up was offering to slap the colourful state on my plate right here in the UK, I was, like a delighted Dragon in the Den, resoundingly ‘in’. My investment was my appetite, the return was a grand Rajasthani feast cooked by Aditi Dugar and Flora Hilleary, a foodie dream team over from Mumbai to open their ‘Rasovara’ (royal kitchen) to lucky Londoners.

Chef/Director of Greenhill Kitchen Flora has worked restaurants in Jodhpur and Jaipur, whilst Aditi’s family hails from Rajasthan. The pair is based in Mumbai, where, it transpires, we share many Bombay buddies. Hosting regular events in India means Flora and Aditi have the pop-up process down-pat – the candlelit mezzanine is as nice an environment as any fancy ‘faine dainer’.

The menu reveals we’ll be dining both abundantly and well. Half-a-dozen chai tumblers housed in a carrier Aditi carried from Mumbai contain a sextet of Rajasthan-inspired relishes –  verdant hari chutney; orange pickle; a , desiccated, powdered chilli masala; raw mango pickle; a thin mint raita with boondi (crisp batter droplets); and Jaisalmer’s intriguing ‘ker sangri‘ – made with a combination of  caper-like berries and string-like pods from a thorny evergreen tree from the Thar desert. 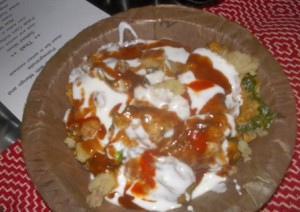 Rajasthan is noted for namkeens – savoury snacks – many of which were invented by the Bikaner region’s many manufacturers. We munch our chutneys with crunchy pappads and their tapioca-based cousins; like prawn crackers minus the fishy flavour; plus banana chips and a diminutive corn-based namkeen I’m keen to hunt down. It all amuses my bouche far more than a silly little shotglass of something cheffy ever could.

The achari fish tikka, though, is a pretty little masterpiece that would sit well on any Michelin menu. Small pieces of salmon are a perfectly pearly inside their curd-based crust. The enticing aroma of those pickling spices gets up your nose, irritating only in the sense that it leaves you wanting more. Mango ban be damned – this comes with chunks from the fruits Aditi brought over before 1st May.

Palak papri chaat is very different and no less delicious for it. The snack is served just like you’d see it on the street; in banana leaf bowl all a-brim with flat wafers, cool yogurt, spicy tangy chutneys, and crisp spinach leaves encased in a light, carom-seed-studded gram batter. That spice’s earthiness flavour lends a kind of sweaty, sexy undercurrent to the perfectly-balanced chatpata concoction.

It’s hot. Well actually it’s cold – but you know what I mean. The dining partner prefers a bit of posh, so has fallen for the fish; but for me it’s that chaat that delivers the finest foreplay. Different strokes for different folks – either way, the starters have given us a raging appetite for the main event. Handy, then, that it’s a thali – that multi-dish meal for which Rajasthan is so known.

The companion is a well-known Bread Hog, so I’m careful to lay down boundaries from the off when we dine as a duo. The fact there’s a diminutive disc each of deep-fried dal puri and besan roti makes the process painless, but does me out of being able to nab the bigger bit. But I do make sure that the majority of both the methi-flavoured thepla and friable, flaky phini roti ends up marked as ‘Mine’.

An individually-plated thali is a pleasing preposition for those who like to clearly mark their culinary territory. I am one such individual, so when it transpires we’re expected to share a single large specimen I’m rather wrongfooted. On the other hand, it means that if I move fast enough I can pick the choicest morsels.

But I’m a slow eater. Luckily the opponent (ahem, dining companion) knows me well enough to let me have my wicked way. Anyway, Aditi’s more than happy to top up the dishes we find most delicious – plus provide us with another round of that utterly brilliant bread. We need it to dip in thin, earthy tadka dal and wrap around marvellously mealy chunks of potato from the aloo mattar. 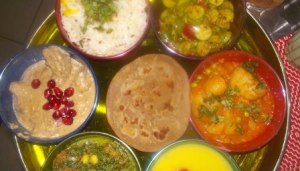 Little matter that the chicken and jackfruit pilau is a little lacklustre; it just means we can reserve more relish for the remaining dishes. The kofta in the deeply savoury palak’n’corn subji are actually made from bottle gourd – but these meaty morsels could dupe the most committed carnivore. Slices of dried tindli in the ginger-y achaari subji provides a bitter-salty- crunchy counterpoint. Cracking.

But the shining star of this fulsome feast is the goat safed maas – the mild ‘white’ sibling to the same state’s fiery ‘red’ laal maas. The ingredients for the rich, creamy gravy come straight from the royal Rajput pantry; decadent dairy products, cashew nuts, numerous superior spices. It’s like the best curryhouse korma you never had; indeed, it’s the dish on which that Brindian staple is based.

Rajasthan also has a right royal way with sweets. Dessert is a delicate, dainty serving of badam katli – the Indian answer to marzipan – razzle-dazzled with silver leaf. Were it the cashew katli that does not please me, I’d have been pleased with the portion size. But as it’s almond, I’d happily have traded that silver for another square. Triangles of mango and malai kulfi are ample compensation.

A Church of England education means I have whole hymnbooks of rousing religious songs indelibly ingrained in my memory, their mental recital often triggered by certain words. Since scoffing my way through Greenhill Kitchen’s menu, it’s been, ‘There is a green hill far away…’. I am not grateful for the earworm. But I am very grateful indeed that Flora and Aditi came near enough to feed me. 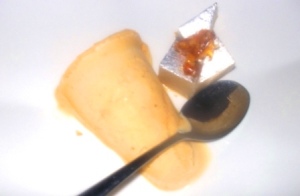