From fairly bland beginnings, London’s Indian restaurant scene has at long last gathered the momentum of a speeding bullet train. From venues specialising in a specific dish (here’s lookin’ at you, DUM Biryani House), to those twisting street eats and family favourites into arresting new arrangements (please step up, Kricket and Talli Joe), to operations honouring the time-tested cuisines of India’s ancient royal courts (Darbaar by Abdul, this one’s for you), the palate-pleasing food on offer in the capital is finally opening eyes to the sheer scope and diversity of a country with far more to offer than ‘curry’.

But lest we forget, the new wave would be nothing without the old guard; Vivek Singh wooing politicians with Westminster’s Cinnamon Club; Alfred Prasad earning a Michelin star aged 28 at Tamarind; Veeraswamy flying the flag for fine Indian food since 1926; and Incredible Spice Man Cyrus Todiwala further earning that moniker with every television appearance, festival demo, and restaurant opening.

Try the old, try the new. Have double the fun and fall in love with both – starting with this pair… 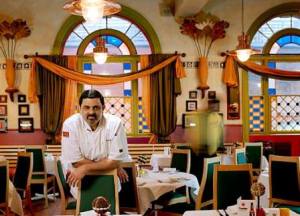 For the past 21 years, this East London jewel has been dishing up Desi delights from the mind and kitchen of Cyrus Todiwala. As much ‘welcoming home’ as ‘restaurant’, it’s an Indian food institution where it’s rare a first time diner doesn’t become a much-valued regular. Decor and food flavours alike are bright and bold, and Cyrus refuses to take customer favourites off a menu which also features regularly-changing seasonal specials (and ample information on the brilliant British producers behind them).

Dhaansaak – A rare example of the authentic Persian-influenced Parsi special

Snaring a seat at the monthly ‘Khaadraas Club’ is like dining in the Todiwala’s own home – you’ll eat a family-style meal introduced by your hosts.

The name to drop

Pervin Todiwala. Cyrus’s wife is a wickedly-warm, wonderful host – and a top-level chef in her own right.

SOMETHING NEW: The Baluchi at The Lalit

Not just new, but super swish: in India, The Baluchi appears within the finest hotels. In the capital, it’ll take up residence at the first British outpost of luxury hotel group, The Lalit. The menu is long and comprises a mixture of uber-traditional regional specialities and offbeat, modern meals. Esoteric ingredients are sourced from the subcontinent, there’s an in-house bakery called The Naanery, and glam, Desi-accented design further adds to the authentic experience.

The name to drop